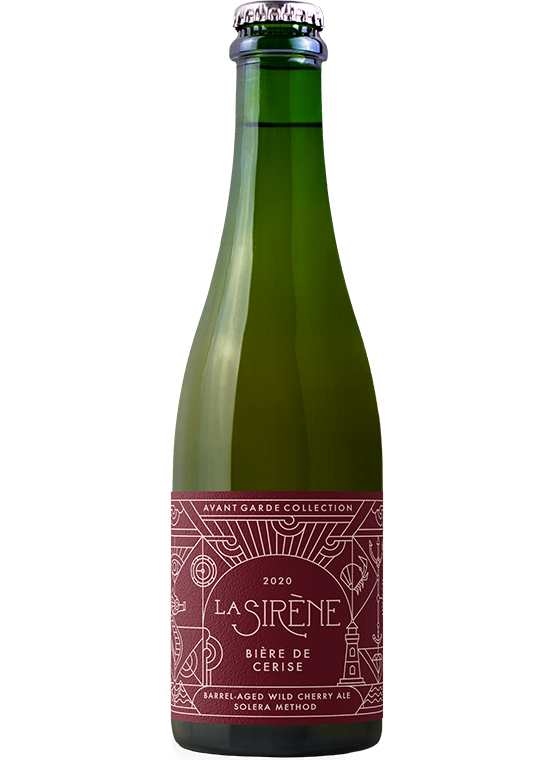 Biere de Cerise (BDC for short) is our annual Barrel Aged Cherry Wild Ale (Solera Method) that has been sitting on whole European cherries since 2016. Solera Method in the sense that we only empty part of a few barrels each time we release this cherry wild ale then top up the barrels with fresh beer. The cherries are also topped up to give rise to complexity enveloped in fruit freshness. The cherries themselves are a blend of  Marasca Cherries from eastern Europe & the Guigne D’Annonay from France. They are put whole without stone into our barrels where they slowly fill with the surrounding beer and as the temperatures in the brewery increase & decrease with the seasons, this expansion & contraction of beer into and out of each cherry is what creates the slow evolution of this sour wild ale!

Making the Biere De Cerise is one of my great joys in working here at La Sirene. The ability to work with and blend various barrels from 2016 & earlier of spontaneously fermented ale that has ripened on whole cherries that whole time just blows my mind. This cherry wild ale reminds me of those wonderfully rich yet fresh Krieks I used to drink back in the day when I first discovered Lambic beer..

La Sirene Brewing acknowledges the Wurundjeri people as the traditional owners and custodians of this land and pays respect to their Elders past and present.

This item has been added to your cart.